Date: Jan 1-2, 2010
Destination: Browns Peak (7657 feet - Tallest in Maricopa County)
Who: Justin and Leonard
Details: "4 Peaks" is a group of 7000-foot peaks about 40 miles from Mesa AZ. At 7657 feet, Browns peak is the tallest. It is 2000+ feet higher than Payson and does get some snow each year. It is mostly quartzite rock and is decent for climbing. The hike is approximately 5 miles round trip with 2500 feet elevation gain.

I have been looking at "4 Peaks" from Mesa for the past 8 years. I have camped in the area several times with our local Boy Scout Troop but have never made time to summit Browns Peak. In true "Storage Geek Hiking" style, Justin and I decided that the first day of January would be a fine time to see just how "challenging" this hike/climb would be...with the research that I had completed, I knew there would be several small sections of climbing and lots of steep scrambling with some good exposure towards the end. To top it off, while most people are sleeping off their hangovers...we are living the dream :)

*** For a quick video highlight of this climb...check out Justin's work: http://drivespike.com/Four_Peaks_ORV4.html !!!Phreaking cool Justin!!! Seriously...check it out... Google Earth View via Garming 305...route from trail head to our camp at 4 peaks saddle 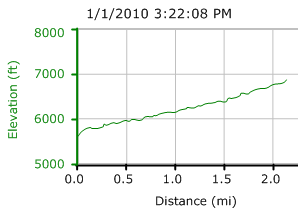 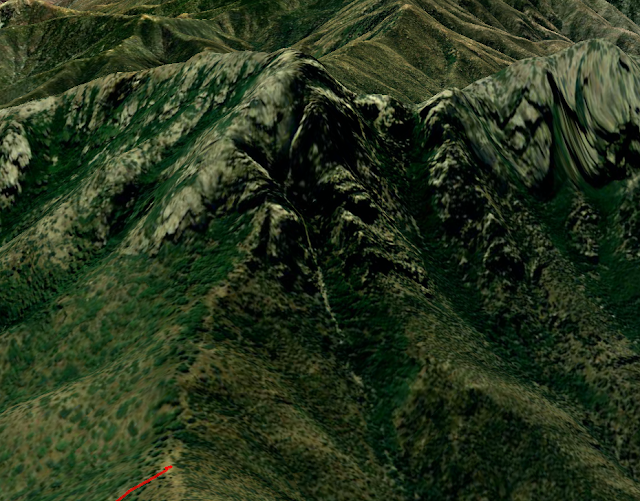 Google Earth view from saddle looking towards the "chute" to summit Browns Peak. 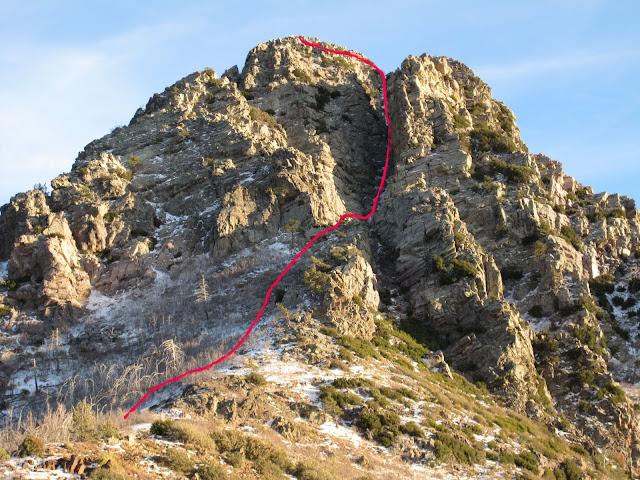 Justin and I left Mesa around 1pm. It is a 30 minute drive to the 4 peaks turn off and about an hour drive on rough dirt road to the trail head. It took us an hour and a half due to.... 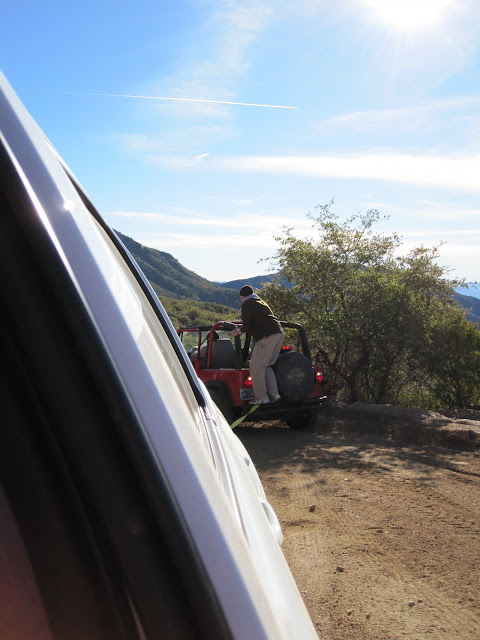 If you have never driven 4 peaks road on a holiday weekend...it is a jeep/quad/dirtbike speed fest. I must have swore several times that if some idiot flys around one of these corners and hits my truck I am going to beat them...if they aren't dead already...well, as we are coming around a corner a jeep rounds at the same time going way to fast. I mention to Justin that people are phreaking crazy out here... as I am watching in my side view mirror...sure enough, I see him fish tail his 4x4 and go right of the edge of the road. There is probably a good several hundred foot drop at this point but luckily loose dirt and shrubs caught him. We stopped and backed up...Justin claims the look in this guys eyes were priceless as his jeep was teetering on one front and one back wheel and I am sure he was wishing he had brought clean underwear...before I would tow him out though, I had to grab a quick picture as proof :)...got to love it...2 wheel drive tacoma pulling a 4x4 jeep out of the ditch!!! IDIOT!!! 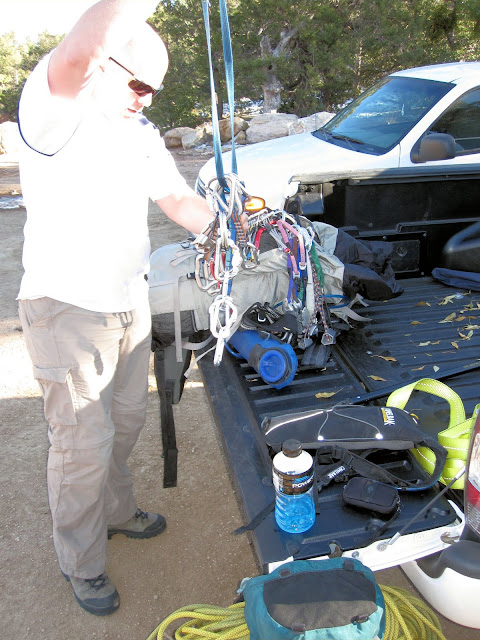 After several more near misses, we finally make it to the trail head and gear up for the hike in. It is only 2 miles but it is already 3:30pm and will be dark by 5ish...

*** Side note...there is a alternate "rock climb" route to the summit of Browns Peak called the Lady Bug route. It is a low class 5 "trad" climb meaning easy climbing but no bolts. We brought our rope and trad gear and figured we would make a decision once we got there if we would climb or not. Turns out with time and conditions the hike would be technical enough...but we will be back! 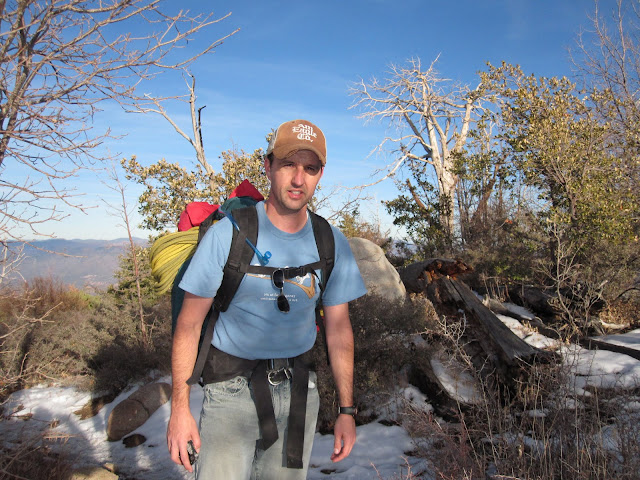 Justin with his lucky shirt...the last time he wore this hiking we were caught 800 feet up in the pitch dark on Weavers Needle...and as always "it is all fun and games until someone looses a nut." 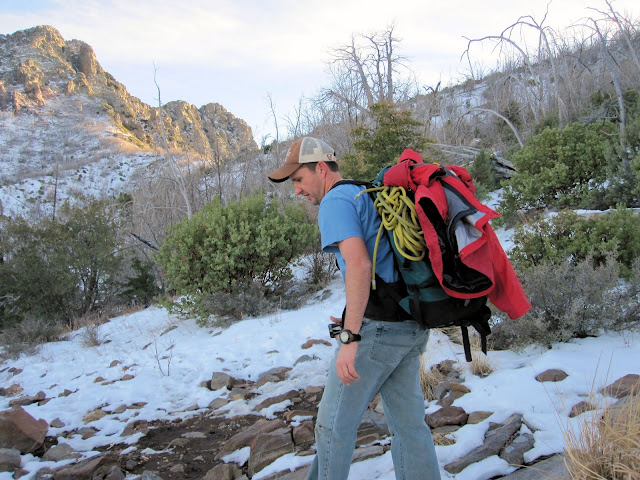 Almost at the saddle...top left you can see Browns Peak. 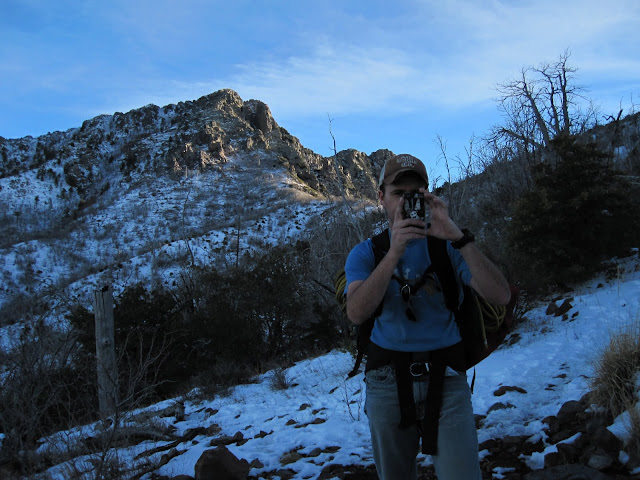 Justin is starting to make quite the iphone photo editor...here are a few of his pics from this trip: 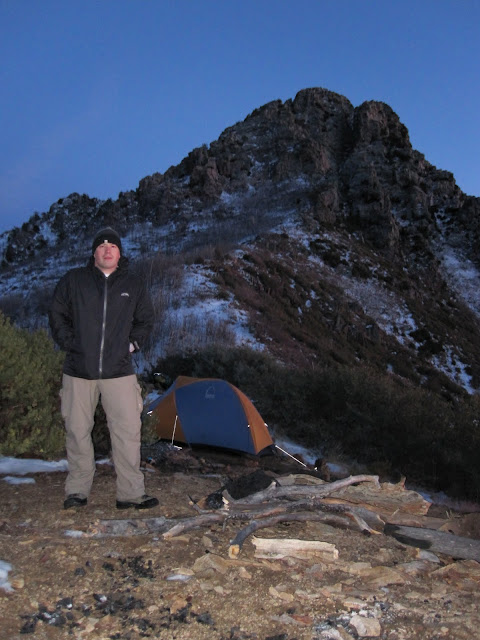 Made it to the saddle in a little over an hour. Tent is set up and anchored down tight...we had heard that there can be crazy wind here so we weren't taking any chances. 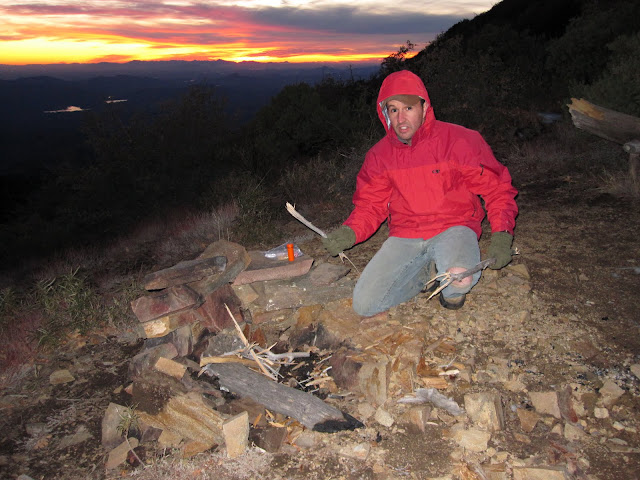 Justin prepping the fire...kerosene and road flare matches do the trick every time. Temp is about 41 degrees and the ground is frozen pretty solid. 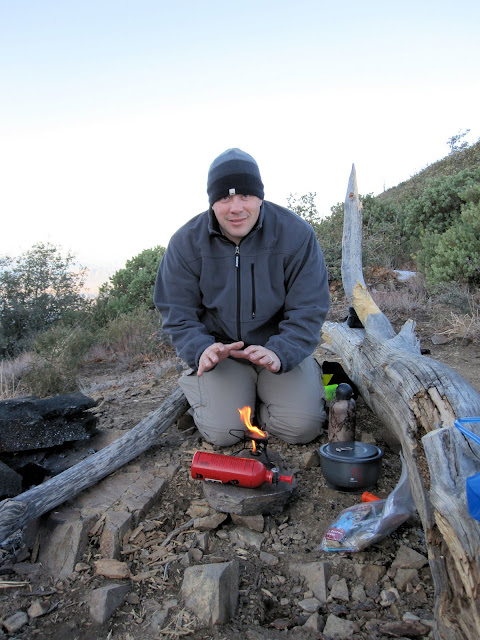 Ok...when "big agnes" (company that sold our sleeping bags and pads) recommend that for winter camping the "insulated" core requires an additional pad...believe them. The cold from the ground went right through the "insulated core" and froze us...long cold night...but now we know. Picture of me prepping the stove/keeping warm...breakfast of champions...instant oatmeal and hot chocolate. 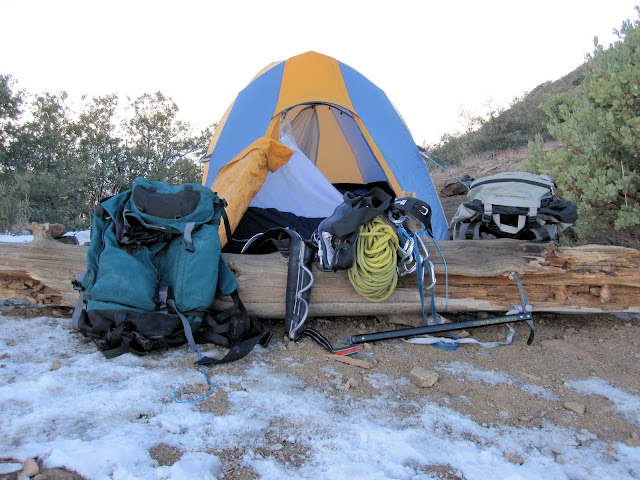 On our way to the saddle, we past several groups of people who had failed to make it to the summit. They said the chute was loaded with snow and ice and it was way to dangerous...with these reports we decided to not only bring the ice axe but bring the rope and climbing gear as well...that way we could protect the steep sections if we felt to exposed. Turns out we carried it all to the top for our "peace of mind" and didn't need it...made for cool pictures though :) 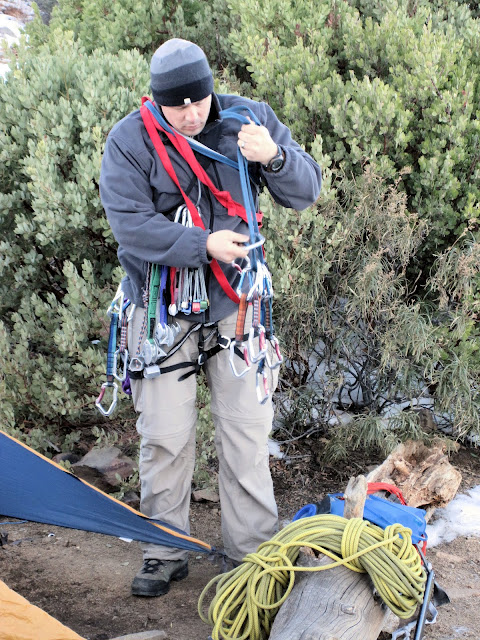 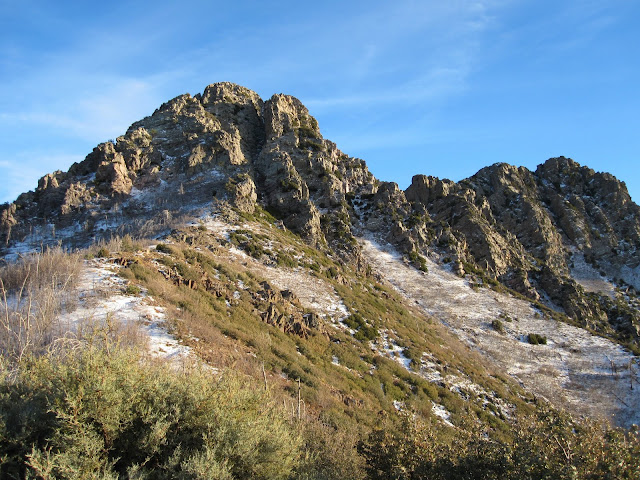 Looking up towards the route we will climb from the saddle. 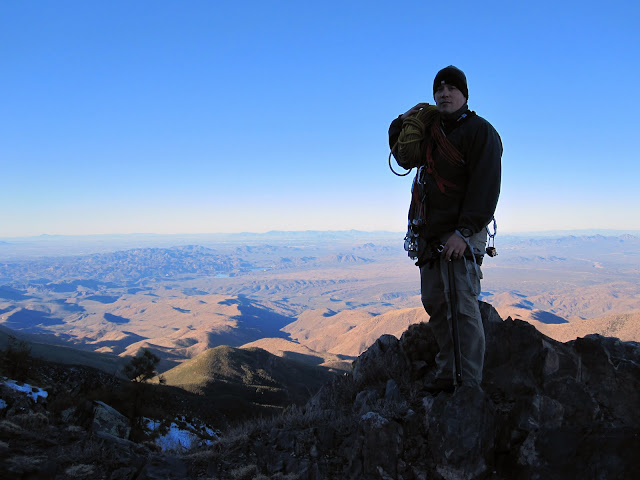 One of my favorite pictures from the hike. Looking back towards the Superstition Mountains and lakes. 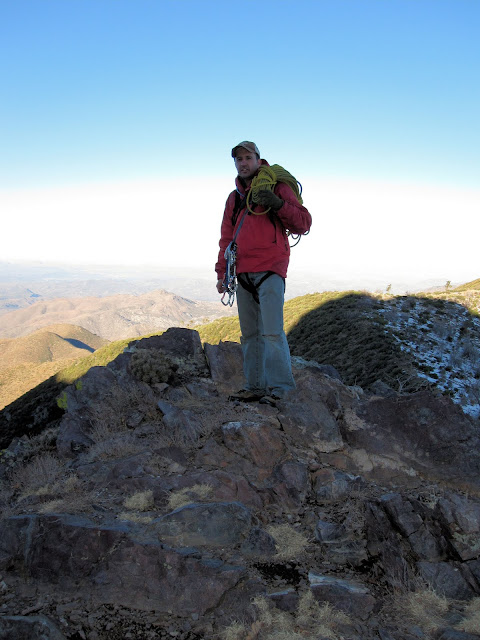 
Great view up the summit route 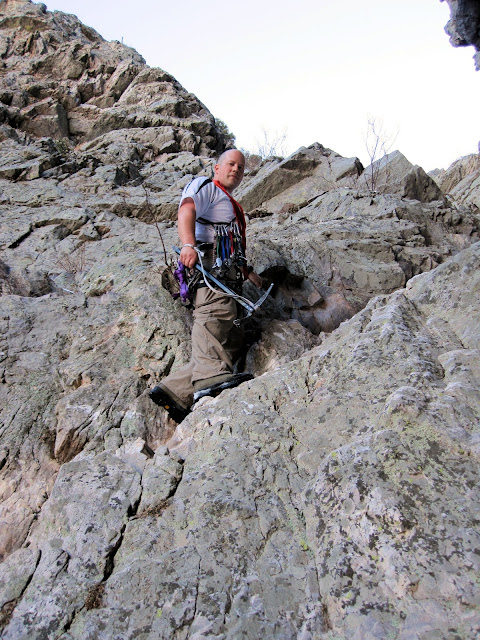 Started to warm up a bit so we stored some warm gear under a rock and headed up. Man it feels good to actually use the old ice axe after many years of it collecting dust in the garage.


Working the rust of the ice axe 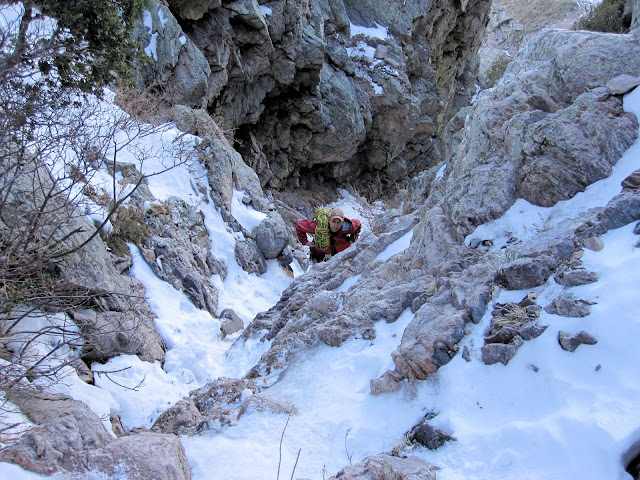 Turns out the hikers who turned back weren't just pansies...there really was snow and ice all the way up the chute. 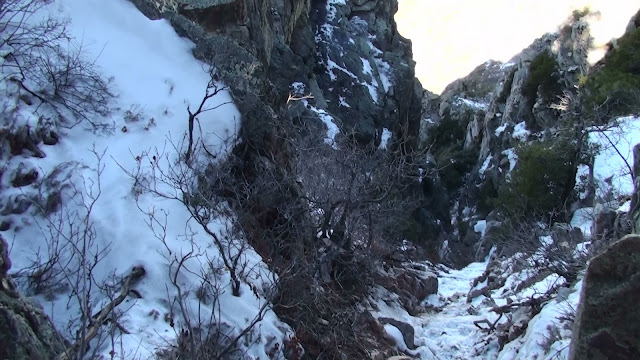 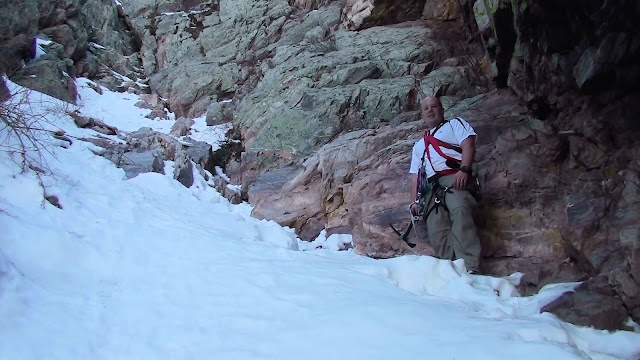 Using the trusty axe to cut steps into the snow/ice and clear the holds. 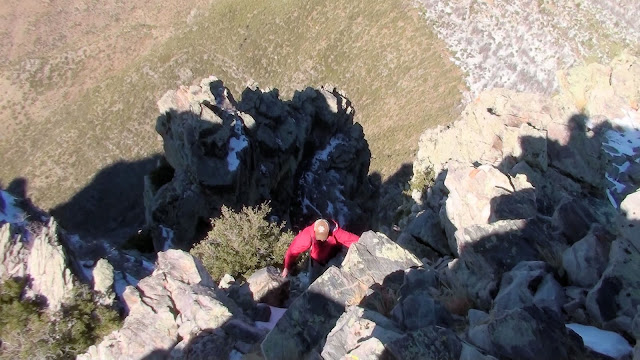 Justin coming up to the summit...phreaking cool picture. Just a bit of exposure at his back...looks worse than it really is. 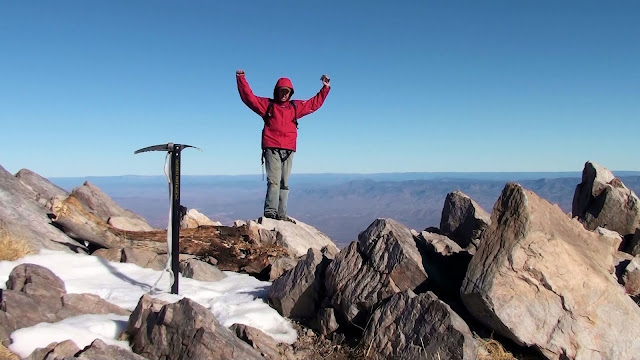 At the top of Browns Peak! 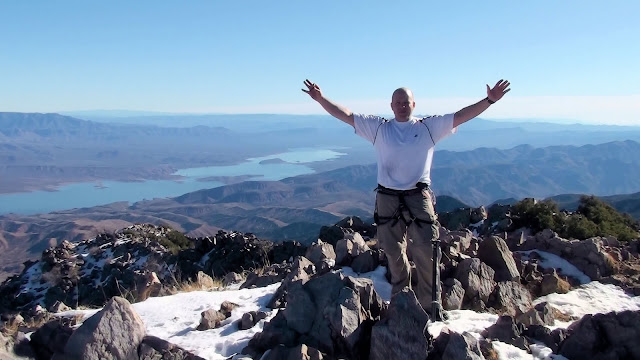 What a great morning...glad Justin carried the rope all the way up:) 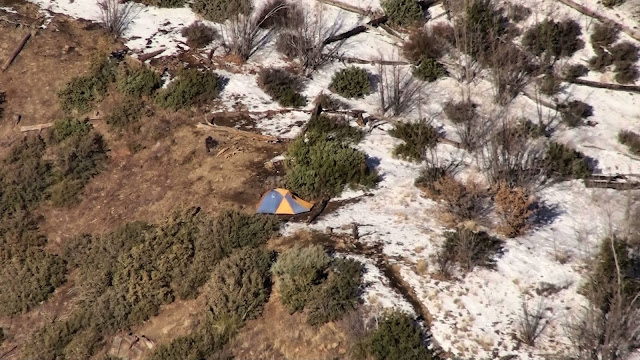 Zoomed in at 10x optical...back to camp.


If you watch only one video, this should be the one...shows the true feeling of the height of Browns Peak from the saddle. 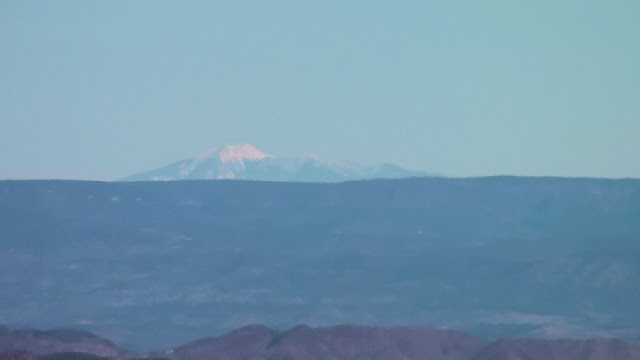 Was a beautiful clear day...could see 150 miles to Humphrey's peak in Flagstaff! 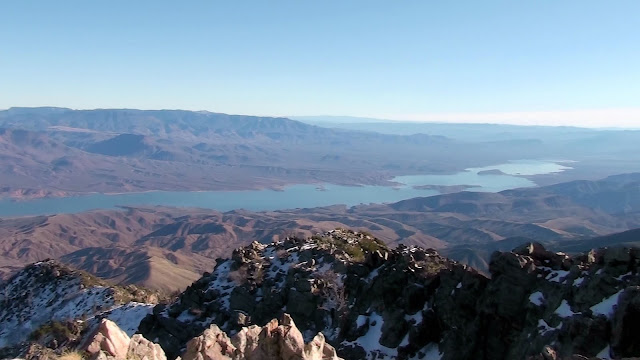 Looking down at Roosevelt Lake. 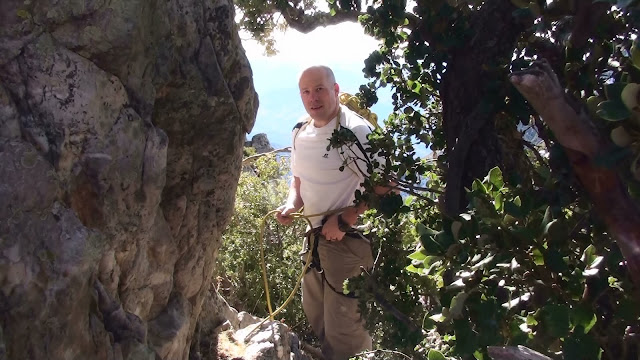 On our way back down the chute, there is a nice little notch where the sun in shining and a nice little tree is growing. I take the rope and tie it in as a backpack. It wasn't too bad of a down climb and we didn't end up needing it.


Tying on the "rope backpack" at the notch.


Video heading back down 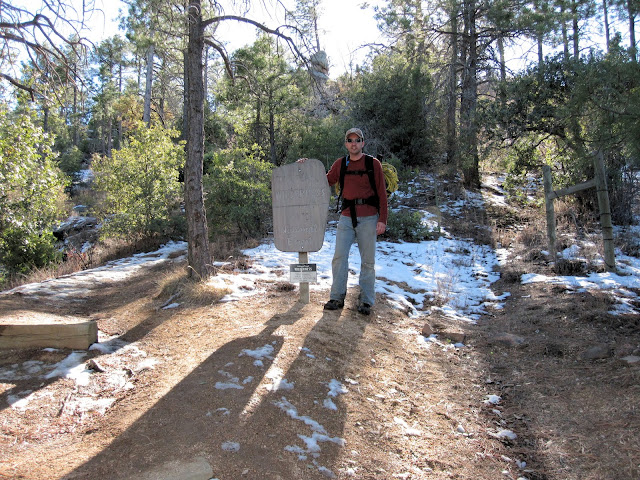 Made it back to the trail head.
Posted by Leonard at 8:37 PM

Leonard
"Living the Dream!" My first 35 years have been the best so far;...my foundation in God, an incredible wife, 3 super kiddo's, great friends, a job I really enjoy, and few adventures mixed in. This blog is about those adventures...and what's next!